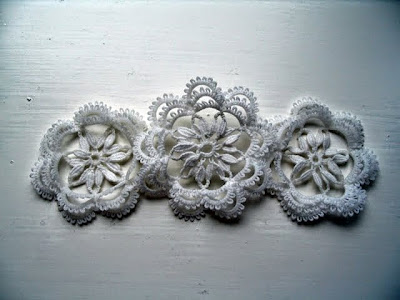 These cluny rosettes are another idea I have had in making a bridal headdress.
They have been stiffened with sugar syrup.
I have almost finished another set of rosettes, but this time I have made them half ones and finished them off with beads. I shall have a go at stiffening them with PVA glue.
I will post a picture when they are done.
Posted by Toptattyhead at 18:57 5 comments: 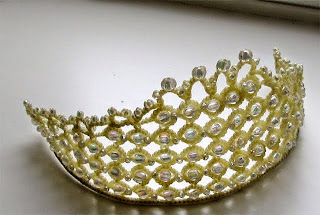 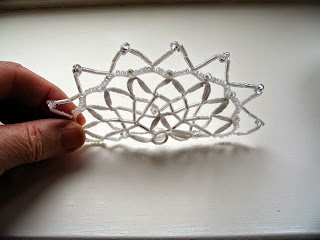 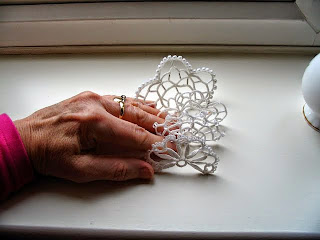 For any who are interested....I use twice the amount of sugar to the amount of water. For the tiara and motifs (I have put in my album) I used half cup of sugar to quarter cup of water. Put into a saucepan, bring to the boil gently, stirring constantly until all the sugar is dissolved and then boil rapidly for approximately 2 minutes. You want a syrup that is thin enough to soak into the tatting but not too thin that it will not dry very hard. (Only experimentation will give you the right results.)

Shape the tatting by pulling into position and then place onto a baking sheet covered in alluminium foil and put into a slightly warm oven. I set my fan oven at about 75 degrees C. It mustn't be any hotter otherwise the tatting will brown! Keep a watch on it! I take it out after 5 minutes and move the pieces about so that they don't stick and then put them back in for another 5 minutes, which will probably be enough.

Try it and Happy Stiffening!

As many of you know I am in the process of designing a bridal tiara for my future daughter-in-law and, in the past, have always stiffened tiaras with a sugar syrup, as I want the tiara to be rock hard.

Many of our fellow tatters do not like using sugar syrup because they concerned with insect problems. I have never had this problem in the UK as it doesn't really get hot enough, for long enough, to cause a problem. Also it may have something to do with the fact that I bake my syrupped tatting in the oven!

Anyway....I thought I would try the boracic crystals favoured by many tatters, as it not only stiffens but sparkles as well. Weelllll! OK this is true. I dilligently stiffened my sample motifs of tatting with the borax and yes, they were fairly stiff, and yes, they did sparkle, but unfortunately, every time you touch the motif, the sparkly crystals come off onto my fingers.....just like a Christmas card.....which is not very good for an item that is going to be put into a bride's hair! Looks just like dandruff! LOL

Ah well back to the baked syrup. But before then, I am going to see how stiff I can get my motifs with PVA glue and will report back later.
Posted by Toptattyhead at 12:51 3 comments:

Some time ago I posted about designing a bridal tiara for my future daughter-in-law....I was playing around with some motifs, but had to put them aside while Christmas and New Year came and went.

I picked up the project again a couple of days ago and this is what I have come up with. I only have to stiffen it, but I thought I would photograph it first to show a before and after. 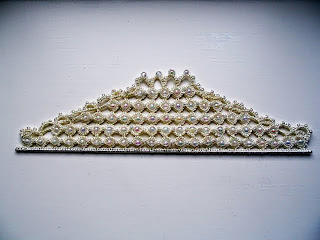 have used a thick shiny thread, that was not easy to work with, but looks really sparkly (the photo does not really pick the sheen up) and 6mm and 3mm sunrise pearl beads.

I will post again when I have stiffened and shaped it. 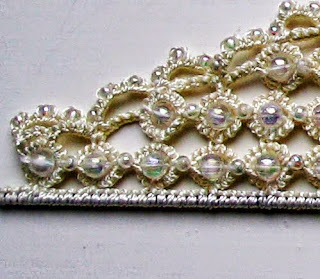 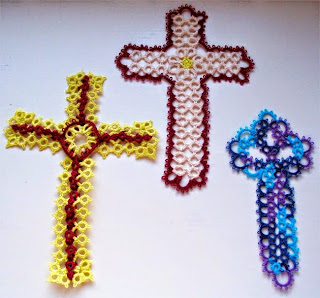 My Mum asked me to make some bookmarks, so that she could give them to her new friends in the residential home that she is now in. I made the cross one that I had designed last year (Coates size 20) and also designed the variagated one (Lizbeth size 40). I then went on to make the cletic cross in yellow Lizbeth size 20 and maroon Coates size 20. This looks exactly the same front and back. 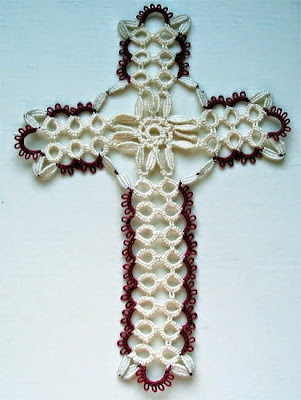 Just to let everyone know that the video on the split chain is now completed and uploaded onto YouTube. Here is the link http://www.youtube.com/watch?v=lPXkMb2BV2g and also there is a permanent link on the right side bar of my blog under Video Demonstrations.

I have also included in the video, a way of doing a split ring, using just one shuttle and the ball thread.

As YouTube only accept videos to a mazimum of 10 minutes I had to do a fair bit of editing. I hope this doesn't spoil your enjoyment of the film, but I have still managed to cover the necessities!
Posted by Toptattyhead at 12:29 6 comments:

I am thinking of producing a short video to demonstrate the split chain. Do you think that it would be well received?

I don't mind doing it, as long as it would be useful to other tatters. For some reason, many tatters shy away from doing the split chain, and yet, once you get the hang of it, it really isn't difficult.....and such a useful tool to have at your fingertips!
Posted by Toptattyhead at 14:47 11 comments: