This is my first adaptation

And this is my second adaptation
Posted by Toptattyhead at 11:46 2 comments:

I haven't adapted this Anne Orr edging, just written out the pattern in modern tatting language.
Posted by Toptattyhead at 11:43 2 comments:

We have been asked by Georgia Seitz of the On-line Tatting Class to adapt some of Anne Orr's tatted edgings and write out the patterns/diagrams in modern tatting language.
When there is enough to put into a booklet, it will be sold to raise funds for the Palmettos Tat Days sponsorship.

Here is my take on two of them so far. In the ecru one I have slightly adjusted the stitch count and made the centre picot a long one.

Ms Orr calls the pink and white one Pheasant's Eye and so I thought that beads would be perfect for this. Again I have made the centre picot longer. 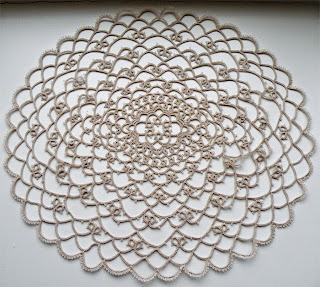 The doily is now finished. I have also finished the written pattern, but I have offered it to Georgia﻿ Seitz, to help raise funds for Palmettos sponsorship. If it is that she is not in a position to sell it to fellow tatters, then I will post it on my blog for free as usual.
Posted by Toptattyhead at 16:51 13 comments:

Here is the doily, now a little bigger. I'm quite enjoying this pattern, it seems to be flowing naturally without having to re-do any rounds. 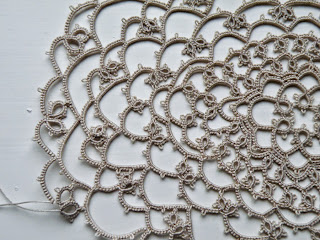 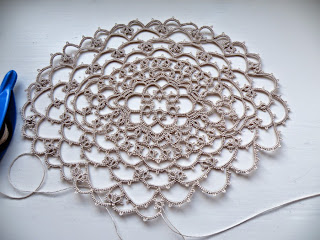 Here, as promised, is a photograph of the next few rows of this new doily. So far each row has worked in very well.....no retro-tatting! Mind you, as it gets bigger, this will probably change! LOL!
Posted by Toptattyhead at 12:43 10 comments:

Having finished all my projects and having nothing in particular to do I thought I would make an oval doily to put on my new television table, which itself is oval, and is in black glass. 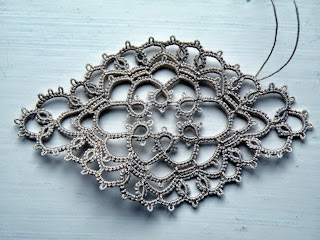 This is the start. I have done a couple of more rounds and will post a picture when it is bigger still. I am writing the pattern out as I go, for a change. This makes life much easier.....trying to count stitches retrospectively is no joy. I am doing this one in an antique thread in size 40.
Posted by Toptattyhead at 15:44 6 comments: 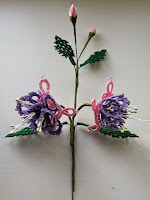 I have now completed the pattern for my double fuchsia, and here is the link to the PDF. It will also be available from the free patterns section of this blog. 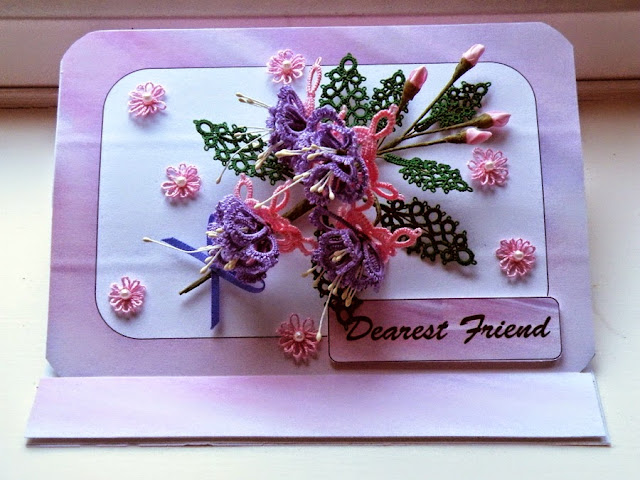