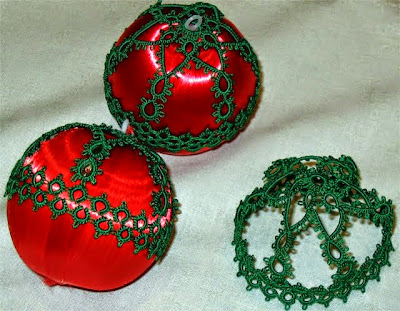 In an earlier post I showed a new 8 pointed square motif. (Scroll down the page a little way.) I have adapted it into a 6 pointed star shape (which makes a very nice snowflake on its own) but then added a band of a double row of rings which fits tightly over the bauble. It fits so snugly that no further attaching is necessary. 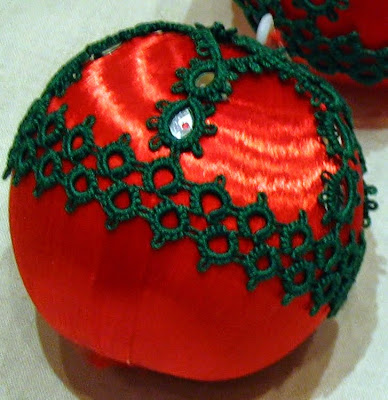 I added silver sequins to this one, which doesn't show up very well on the photograph, but which sparkles prettily when the lights are on.
The next one (nearly completed) has silver beads in the centre of the two rings of each snowflake point.
This pattern reminds me of the Orb in our Crown Jewels! What do you think?
Posted by Toptattyhead at 02:55

I love it! So pretty and it really gets highlighted on the red. I have to search more to see if the pattern is in there somewhere.

I am wondering if this pattern is available anywhere? Or maybe just the snowflake that you used? Love this idea of yours as usual!

Wonderful Linda!
You are a genius: